Prudence Memorial Fund
The Prudence Memorial Emergency Medical Fund is a special fund based on donations to aid in the emergency veterinary care of The Cat Shack foster cats who have very severe medical conditions and need life saving but very expensive treatment. 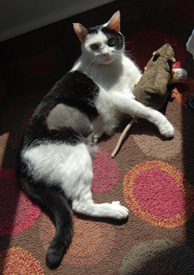 The fund has been started in memory of a brave and tiny girl cat named Prudence. Prudence was just 12 weeks old and was found in the woods by her future adopter who was also a Cat Shack volunteer. She was alone in a drain with a week old compound fracture of her left foot and a laceration to her face, malnutrition and a bacterial infection. She must have been trapped and released herself and was somehow able to survive.

Unfortunately, the doctors were not able to save her foot, but they were able to save her life. Her back left leg was amputated, and her lacerations and her infection were successful treated and with the help of The Cat Shack, her foster mother and a lot of TLC, Prudence grew up to be a wonderful, healthy and adjusted tripod kitty. There was no stopping her! Her foster mother became her adopter and the story should end happily there.

But, In July 2010, when Prudence was not quite 4, she was diagnosed with Lymphoma in her nose. Not fair for a little tripod lion girl. Her adopter took her for cancer treatment and the tumor was gone. Prudence was a brave little girl through her treatment and had no side effects. What a survivor!

In December of 2010, the lymphoma returned in her kidneys, but this time the treatment was not successful. Prudence and her adopter tried and tried. She lost her battle with Lymphoma and went to sleep on April 27, 2011. Many of the people she met along the way commented on her tenacity, her spirit and her will to live. Although Prudence could not win her last battle, her adopter feels that some cats do not get the chance to fight because life saving treatment can be unaffordable. Prudence had almost five wonderful years of life and love thanks to The Cat Shack and donations from the community to help with her life threatening injuries. Her adopter would like to return that blessing and continue that possibility by maintaining a resource for The Cat Shack to help other adoptable cats and kittens that have life threatening injuries and illnesses that are treatable. In that, Prudence can pass on that incredible spirit. 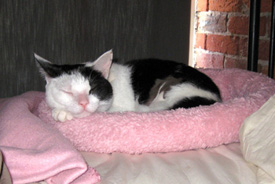 We can't do this without your help. All donations received will be used to help save the lives of these innocent victims.You too can help save the life of a homeless cat for less than you would spend on a trip to the movies. Remember that 100% of your donations go directly to the animals.


Sept 2012, the Prudence Fund is currently being used to help little Columbo!  Please check out his story and progress here: